In the late 1990s and early 2000s, I briefly had a website, Quinnarama.com. It was before blogging and building websites is as easy as it is now, and thus Quinnarama was pretty bad. I liked the content though, basically just sets of my customized Fisher Price Little People, some cartoons and sketches. Sometime around 2002-2003, I forgot to renew the domain name, and someone in the Dominican Republic (!) sniped it. With me finishing my university work, working full time, and with two babies in the house, I decided...rather unwillingly...to put the toys on hold. Now that I'm done with school, the boys are a little bit older, and my wife wants me out of her hair, I'll be reincarnating Quinnarama.com here.

The Fisher Price Little People are where the site started, and that will be a big part of this blog. I've taken around 740 of the classic peg-shaped Little People and turned them into my favorite characters from books, movies, and television shows, marrying an obsession with toys to an 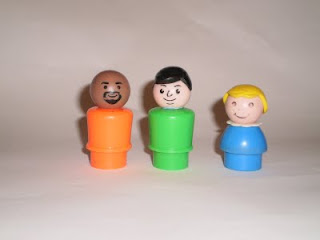 At its most basic, I'm taking the plastic Little People like this: 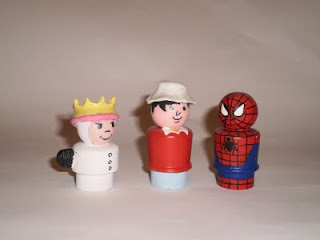 Max, Gilligan, and Spider-Man are all part of bigger sets of characters, and most of the Fisher Price Little People I've made are parts of "families" of characters. I'm sure I'll rhapsodize about that at some point. Right now, it's sufficient to say that there's more on the way. Much, much more. Too much, in fact.
After exhausting a supply of Little People, Sculpey polymer compound and acrylic paints, I turned to Palisades Toys line of Muppet action figures. There are around 100 of those that I've 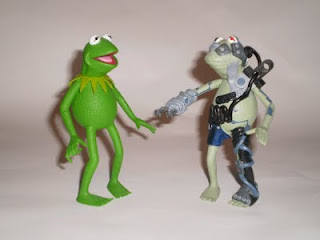 butchered to varying degrees, and those will show up here too. Things like taking Kermit the Frog and turning him into Kermit the Borg... Yes, it's sick and wrong, and many people have accused me of being a little too much like the neighbor kid on Toy Story who did things like putting a pterodactyl head on his sister's rag doll. Well, if I had a rag doll and a pterodactyl, I can think of worse things to do. So maybe I am like that kid. I hope I'm a little more constructive than destructive, but sometimes it takes a little pain to make things work.
And then of course, there's LEGO. Always LEGO. Those have mostly become characters from DC Comics and Star Wars, but there are a few that defy all description. 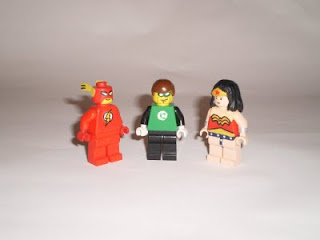 I'll describe those later. For now, here's Flash, Green Lantern, and Wonder Woman. In front of the Invisible Jet.

I don't know if I'll be adding other things to this site beyond the toys, but I've needed a creative outlet for some time now. I've slowed down on making the toys, but I still sketch a lot of ideas for future sets, and might post the sketches here too. I realize it's not great artwork, but it's a fun hobby that friends ask me about from time to time. Hopefully as I continue posting things, I'll be able to get feedback from people and see if there will be a new burst of creativity that comes as a result of all this...Goodness knows I don't have the time, but OCDs rarely ask if you've got the time for a new obsession.
I hope you enjoy visiting Quinnarama, and return often. You never know what kind of insanity you'll get next.
Posted by Quinn Rollins at 7:18 PM