Before the final reveal of Joker and Harley Quinn, I stumbled across these old papers--a kind of sketchbook of part of the "creative process" that I go through when I make these things. It's not just tearing action figures limb from limb and then reassembling them to make new toys. It's mostly that, but not just that. I probably drew these in between calls at a previous job, so be kind. I know they're disproportional and not in scale with each other and everything else--I'm a doodler, not an artist. In any case, it's interesting to see what worked and what didn't--who survived, and who didn't.


The first sketch was Batman and his allies--from the beginning, I wanted Batman and Robin to be Link and Dr. Strangepork from "Pigs in Space." Their allies started out with Kermit as Alfred, and Fozzie Bear as Commissioner Gordon. I still like those ideas--especially Fozzie as Commissioner Gordon. Fozzie didn't end up as any character in the final collection, although I suppose he could have made a creepy Joker. Comedy gone bad. Very, very bad. 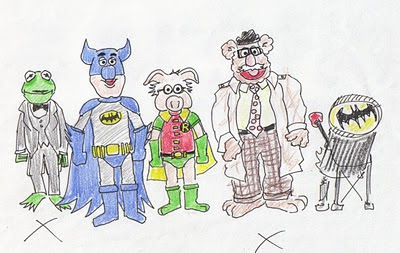 Anyone who knows about my love for both Catwoman and Miss Piggy is probably somewhat disturbed by this fusion of the two. Due to the lack of female characters, Catwoman had to either be Piggy, Janice, or Camilla, so my choice was clear. Scooter-as-Riddler survived to the final cut, but the other two here, Gonzo-as-Penguin and sax player Zoot-as-Two-Face did not. I still like the idea of Gonzo as the Penguin, especially since I don't have any Gonzo in my final lineup. And...I just realized how much that little sketch of Gonzo looks like FDR. Awesome. 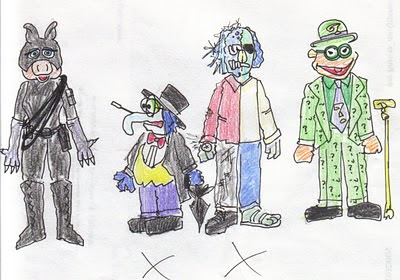 This sketch is the last one that has rejected versions of characters that didn't make it--my favorite too, Beaker-as-Scarecrow. Tall, lanky, and with the potential to be ubercreepy, I love this version of Scarecrow. But I didn't have a Beaker to spare (he's one of the rarer figures), and I did have a headless Animal. So...still creepy, but wow, that Beaker would have been sweet. Everyone else made it through to the final cut. 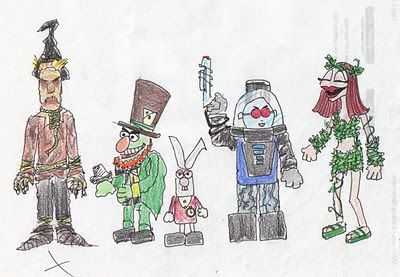 Here's the final five after recasting and revising them. I do love Rowlf-as-Alfred, both because it brings my favorite piano-playing dog into the fold, and because I like the idea of man's best friend being a gentleman's gentleman. Kermit became Commissioner Gordon probably for the simple reason that he was already wearing a trenchcoat. Sculpting a Muppet Penguin from scratch to be The Penguin was a stroke of genius that coincided with my burgeoning self-confidence in my sculpting skills (misplaced self-confidence, but it hasn't hurt anyone yet). When Beaker fizzled, Animal stepped in, in that inarticulate way of his...and Floyd became Two-Face when a Zoot became too hard to acquire. In Batman: The Animated Series, Harvey Dent and Pamela Isley have a fling before they become Two-Face and Poison Ivy, respectively; Floyd and Janice have a thing goin' on themselves, so I thought keeping them together would be sweet. I'm mushy like that. 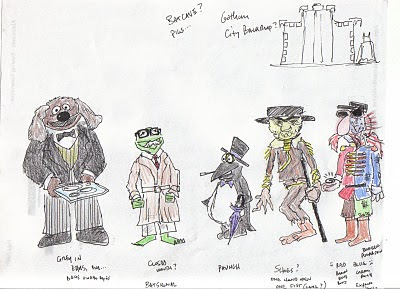 Posted by Quinn Rollins at 6:02 AM No comments:

Back by popular demand, it's the Quinnarama Baby Namer! Okay, only one person asked me, but that person is popular enough that I figured I'd repost this. It was part of the original Quinnarama.com website, and published well before I was even close to having kids. Several years later, I have two sons, and even though I didn't get all the names I wanted in there (it turns out my wife had some say in it too), they're in there somewhere. Thank heaven I didn't have any girls. I'll present this in its original format, swear words and all. Sorry, Grandma!

Quinnarama Baby Namer
Besides producing hundreds of Fisher Price Little People, we're eventually going to produce hundreds of human offspring. This is a list of my favorite names for those lucky bastards; you can use them if you like. 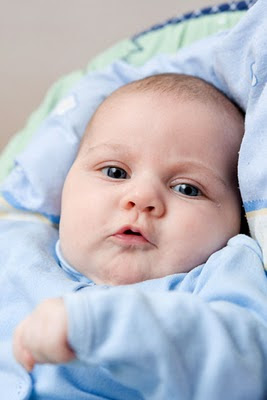 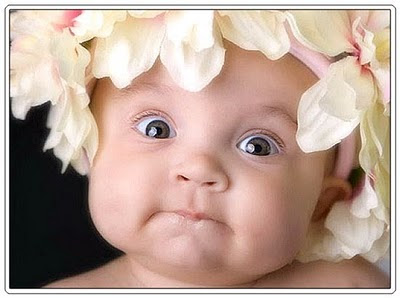 In this penultimate posting of my Muppet/Batman crossover customs, here are some of the villains who don't always make it into the movies or cartoons, but who are still heavy hitters in Gotham City...and who have been making a more respectable showing in the 21st Century than I'd expected.

First up is Scarecrow, master of fear. He was a pysch professor who went a little nuts, and now uses his expertise to scare the heck out of people and take their money. For Scarecrow, I decided to use an Animal figure. While he's usually a drummer for the Electric Mayhem, I happened to have an Animal figure without a head. This seemed like a good time to use him, since Scarecrow's face is completely covered by a mask. So I sculpted a new noggin for Animal out of Sculpey, added a few details to his body, like a shirt and some patches, and that was pretty much it. 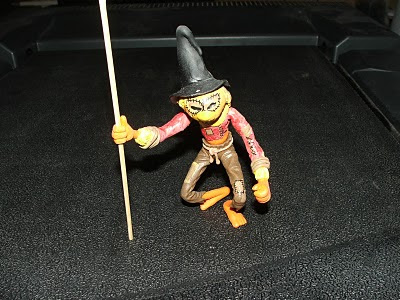 I tried to preserve the shape of Animal's face under the mask, although that nose might not be big enough. Then again, his nose is pretty much foam rubber, so it's malleable. That's right. Malleable. 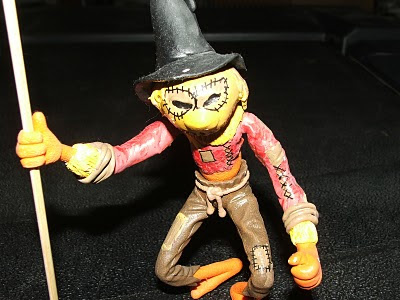 I don't know that anything prompted me to turn Scooter into the Riddler other than I needed a Riddler and had an extra Scooter to play with. I sculpted his suit from Sculpey, based on the Frank Gorshin Riddler more than anything else, painted it, and gave him some "angry eyes" pupils on his glasses. Not much to him. 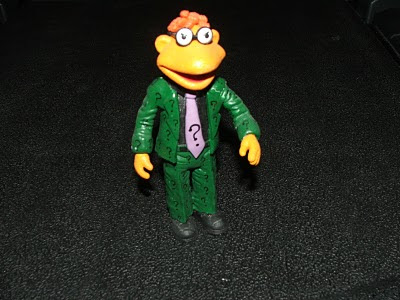 Since Dr. Teeth is a hat-wearing cat, and Mad Hatter likes to make cats wear hats, I figured I'd use the good Doctor for the evil Hatter. Based of course on the Alice in Wonderland character, Mad Hatter commits crimes using hats, usually to get more hats. He's a crazy holdover from the days when more men (and women) wore hats, and it doesn't seem like he'd really work as a villain today, but some writers have kept him around. I gave him a new hat and coat via Sculpey, turned a Muppet Labs Robot Rabbit into a White Rabbit, and that's it.
Dr. Teeth has very odd proportions. Far be it from me to judge. But he's a freak. 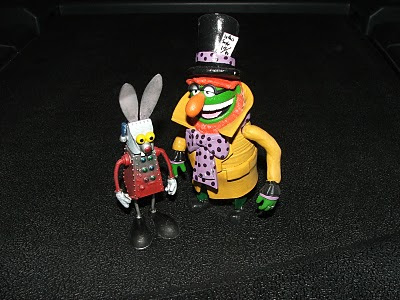 Ra's Al Ghul has been a Batman villain since the 1970's, and wants to dominate the world so he can destroy it, remaking it in his own image. He's tried to do that in various ways, and runs afoul of Batman every darn time. He was portrayed by Liam Neeson in Batman Begins, and is supposedly immortal, resurrecting himself via "Lazarus Pits" when the need arises. I think Sam Eagle would make a magnificent Ra's Al Ghul--the arrogance, the cluelessness, the hot daughter (it's never come up on The Muppet Show, but I'm sure Sam has one out there somewhere).
In any case, this Ra's is from a Muppet Treasure Island Sam Arrow, and has some sculpted ruffles on front of his chest, a cloth cape, and vicious talons to eviscerate enemies. Brutal. A cadre of...lesser...Bat-villains, ready to flee from before Robin's might. Possibly even Alfred. 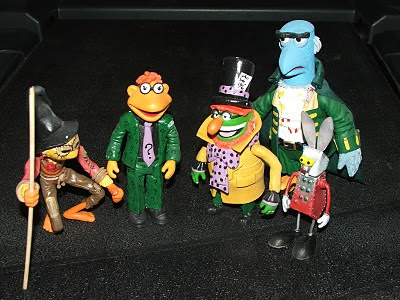 Next up: the Bat-finale, with Joker and Harley Quinn. Stay tuned!

Posted by Quinn Rollins at 8:29 PM No comments:

One of the best things about Batman is his "rogues gallery"--the villains who call Gotham City their home. You'd think that with the Caped Crusader locking them up after every attempted heist, they'd figure it out and try someplace like, I dunno, Omaha...but they keep coming back to Gotham City. And Batman keeps stopping them.

So when I started turning Palisades Toys' Muppet action figures into Batman and his allies, I knew I'd need to have his enemies too. I didn't dig as deep as Zsasz or Clayface, but I go beyond Joker and Catwoman.

These three villains are associated in my mind--partially because of Batman: The Animated Series, and partially thanks to the Batman & Robin movie that I've otherwise tried to purge from my mind. Mr. Freeze, a brilliant but tragic figure, was in one of the first episodes of Batman: The Animated Series, and completely blew me away. I decided that one brilliant scientist deserves another, so I used Dr. Bunsen Honeydew to create Mr. Freeze. I cut away his lab coat, added some body armor with Sculpey polymer clay, and a capsule from a gumball machine became the dome over his head. Once I painted the figure, I knew I got him right. All I need is a little frozen Beaker, and it'll be done. 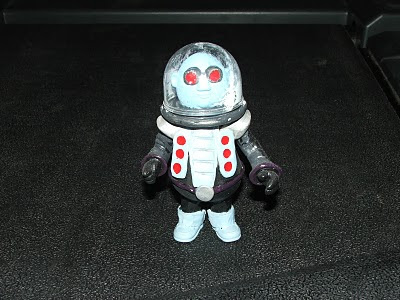 The next villain is Two-Face, formerly Gotham's district attorney Harvey Dent. He's another character I grew to love in the Animated Series, then hated on the big screen when played by Tommy Lee Jones. The Dark Knight brought us yet another version of Two-Face, and I liked him there, although I felt like he was underused and probably overwhelmed by what Heath Ledger's Joker was doing in the same movie. In any case, I picked Floyd, the bass guitarist from Electric Mayhem to play Two-Face in my little caper. I made this several years before The Dark Knight came out, and tried to make his scarred side of his face kind of cartoony but still gross. It's less graphic than what they did to Aaron Eckhart, which is probably a good thing. 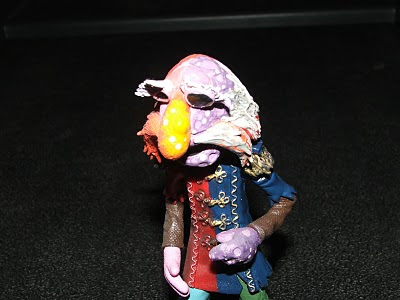 The final villain in this trio is Poison Ivy, who uses plants to commit crimes, and feels that plants are more deserving of compassion than people are. I think Janice, the groovy lead guitarist for Electric Mayhem, makes a fine Poison Ivy, even though she'd never hurt anyone...but somehow i think she's got a green thumb herself. Her costume is made of some silk leaves that I cut into many many little pieces, and I think the effect works better than a Sculpey tunic would have. 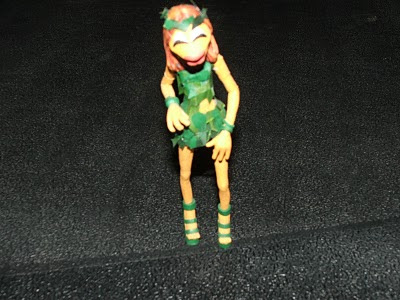 I'm sure they're either hatching their next scheme or looking for directions to Omaha...either way, they're up to no good. 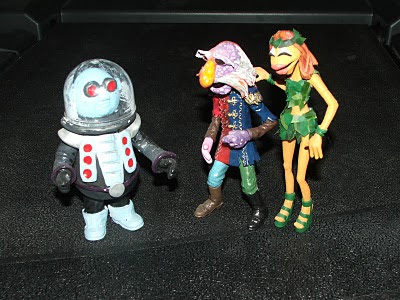 Up next: Scarecrow, Riddler, Mad Hatter, and Ra's Al Ghul. Batman's in trouble.
Posted by Quinn Rollins at 4:15 AM 1 comment: