The final characters we're visiting as part of the Muppet Batman group of enemies and allies is Joker and Harley Quinn. At one point, I think I was considering Fozzie Bear for the Joker, but I wanted someone with a little more edge. More edge than Fozzie Bear, you say? Impossible! But true. So I looked at the Muppets I had kicking around the toy box, and it became clear that the Muppet who unnerved me the most when I was a kid was undoubtedly Crazy Harry.

Crazy Harry was fond of blowing things up. And, it being the 1970's, people were prone to saying things like "That's dynamite, Kermit!" and then Crazy Harry would pop up with his little detonator box and say "Did someone say DYNAMITE???" and then depress his plunger, and an explosion would go off. It happened a lot. In any case, Crazy Harry was nuts. And, with a little bit of a paint job, I think he makes an excellent Joker. 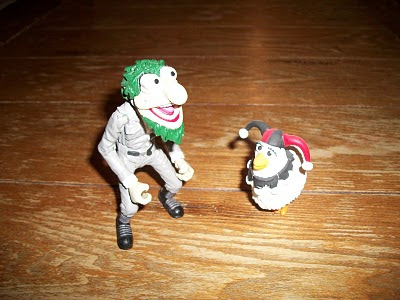 It's surprising how little I had to do to the action figure to make him into the Joker, really. I lightened his skin a shade or two, painted his hair green, and just repainted his clothes to look more like an inmate--er--patient's jumpsuit from Arkham Asylum. 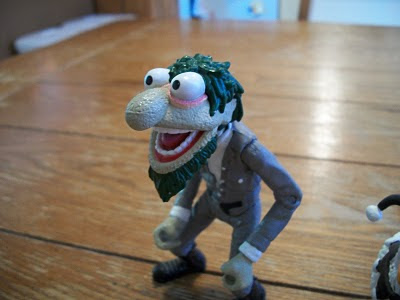 He gets an inmate--er--patient number on his back, too. That's not the PIN number for our bank accounts. In case you're wondering. Really. It's not. 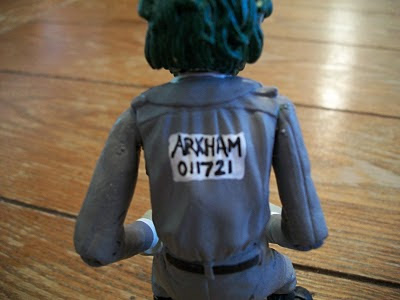 The Joker's main squeeze is Harley Quinn, and in between me really genuinely liking the character, and her being named "Quinn," I had to find a way to get her in. After using Miss Piggy for Catwoman, and Janice for Poison Ivy, that only left one regular female cast member from The Muppet Show--Camilla the chicken. She's Gonzo's girlfriend (when he remembers which chicken she is), but here she's putting on the jester costume to play Joker's moll. So if there's a dust-up later on between Gonzo and Crazy Harry...things will get crazy. Er.
To make Harley Quinn, I just did a simple Sculpey jester's hat and collar. It's not completely accurate to Harley or Camilla, but it works. And hey, she's a chicken. 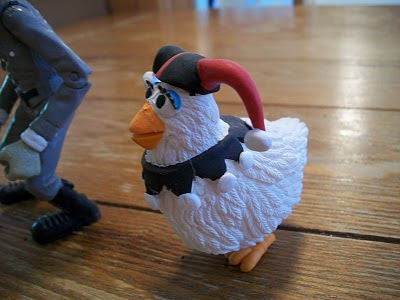 That's it for the Muppet Batman collection--there will be more DC Comics and Muppets figures coming sooner or later, but I think we need to visit some other genres first. The Fisher Price Little People are begging to be let out...I think we'll see some of them this week.