At some point post-SuperFriends and pre-X-Men, there was Spider-Man and His Amazing Friends. The Saturday morning cartoon series starred Spider-Man, Iceman and Firestar, all college students in New York City. I think somehow all three of them lived with Aunt May and "Miss Lion," a yappy little dog that Doctor Octopus should have crushed in the third episode.

I'm usually a DC Comics guy instead of Marvel Comics, but this was a fun cartoon that featured guest appearances from the X-Men, Fantastic Four, Hulk, and every other corner of the Marvel universe. If it were available on DVD, I'd buy it, watch the heck out of it, cringe at the shoddy animation, write reviews railing about how much it sucked, and return it disappointed to FYE for them to resell to the next nostalgic sucker.

Anyway. Here are some of the few Marvel Fisher Price Little People I've made. I'm surprised at how nicely Spider-Man came out. And Firestar's hair is awesome. Iceman...well, that was his design in the cartoon. He might need some work. 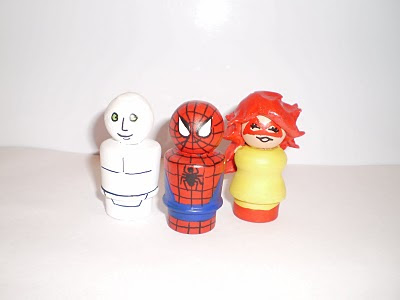 Everyone who isn't a droid loves the Jawas. The dirty little hooded scavengers on Tatooine, they cruise around the sand dunes looking for lost and broken down droids, which they chop shop and resell to suckers eking out a living as moisture farmers.

But since they're played by little people, and say things like "UTINNI!" and have glowy eyes, they're adorable. A-freaking-dorable. And kind of dirty. And they probably smell like feet. In any case, they're an essential part of the Star Wars universe, but the only LEGO set they came with is the Sandcrawler, which cost approximately eleventy-billion dollars. So I never ended up with one, but still wanted some Jawas.

Me being the freak I am, I decided to make my own. Found some hoods, some brown LEGO bits and pieces, some paint, and before you know it, I've got five Jawas utinniing the place down. Turns out "utinni" is a bad thing. Disgusting creatures. 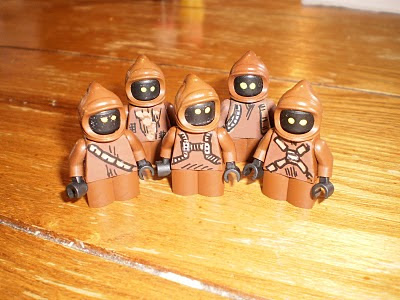 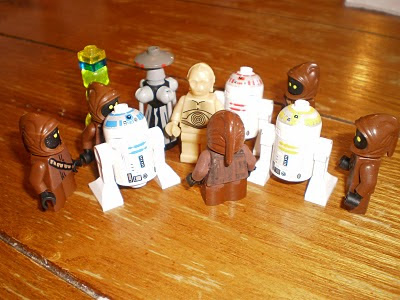 With some droids they're gonna sell. If you buy them, Stormtroopers will probably kill you. But your adopted nephew will end up moving on to greater things. Like near-incest.

Posted by Quinn Rollins at 4:44 AM No comments:

For those of us who are obsessed with pop culture, there's not much sweeter than when those obsessions intersect. And if I have to force that intersection, so be it. A few years ago I had an abundance of time, and a friend at Palisades Toys sent me "extra" Muppet Show figures that had been damaged, were samples, or unsellable. So I had the chance to make way too many custom-made versions of my favorite characters.

Over the next few weeks, you'll see the denizens of Gotham City as you've never seen them before...unless you've seen them before. In any case, we'll start with the Dynamic Duo themselves, Batman and Robin.

I decided to "cast" the captain and scientist from the Pigs in Space sketches as Batman and Robin, so it's Link Hogthrob as the Dark Knight, and Julius Strangepork as the Boy Wonder. I used the Adam West/Burt Ward Batman and Robin as an inspiration, and I think they turned out pretty darn spiffy. 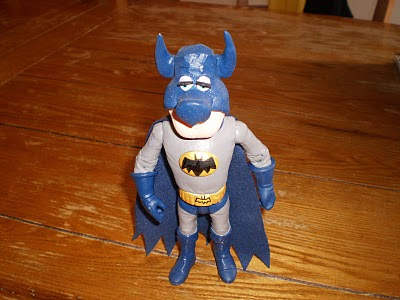 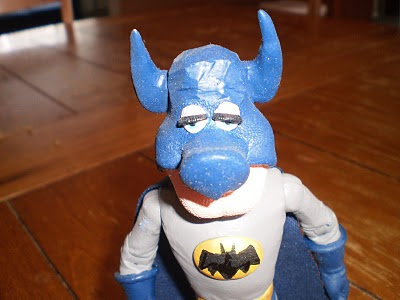 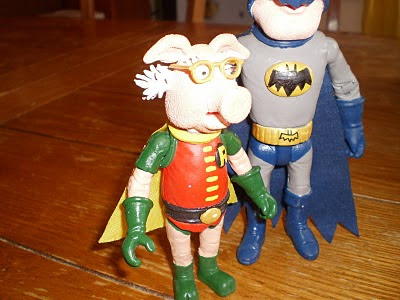 Dr. Strangepork as Robin...with short shorts that make us all uncomfortable. 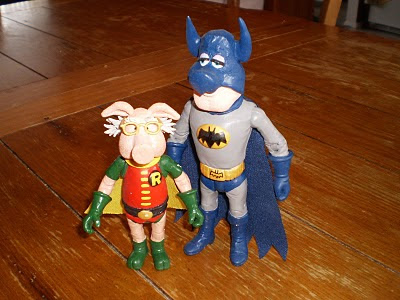 The Caped Crusaders, ready to defend Gotham City against any and all supervillains...until dinnertime. 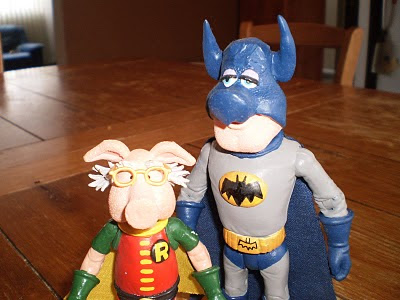 Cartoons about a Fisher Price Family, and why that little boy is always so mad. 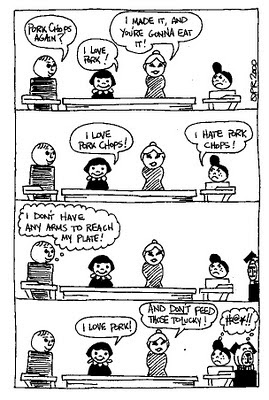 Posted by Quinn Rollins at 5:10 PM No comments:

One of my favorite places on the planet is right in my own backyard. Which, in the Western United States, means it's about three hours away. If you speed. Arches National Park is a beautiful, bizarre collection of sandstone arches and spires in Eastern Utah. I've been there several times, and we're hoping to take our sons there this spring. Here are a few pictures of Rubber Duckie among the red rock formations. 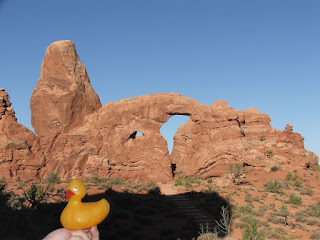 In the early morning, so there are weird shadows. And hands. 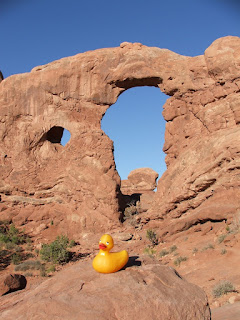 Much better. You get a good idea for how hot it can get there--this was in August, and the temperature was already nearing 90 degrees by 8 AM. But it's a "dry heat." 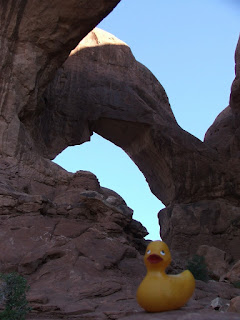 Cooling off beneath a double arch... 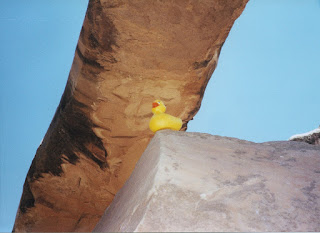 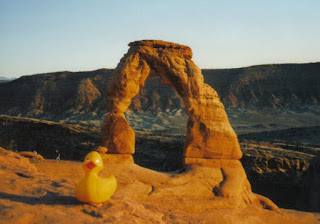 At Delicate Arch at sunset--one of my all-time favorite pictures, taken with a junky camera in 1998. I've got to get back there soon. I'll be sure Rubber Duckie is along for the ride.

Posted by Quinn Rollins at 4:20 AM No comments: