One of the ways I know I've been successful in capturing the feel of a television series or movie when I'm making Fisher Price Little People is that, as I'm nearing the completion of the characters, I'll get the theme music for that show in my head. Today, as I've been rephotographing the Little People set from M*A*S*H, I've got that song in my head. "Suicide is Painless" might be the most depressing lyrics for a sitcom, but M*A*S*H wasn't your typical sitcom. It was one that I didn't "get" as a child, but my parents loved--by the time it went off the air, I was just starting to understand both the humorous and tragic moments in that great series. It was a great show. And it's in syndication all over the place, so at least at certain times of day, you can't swing a dead cat without hitting a rerun. 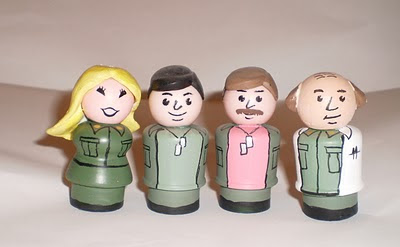 Because M*A*S*H ran for so long and had so many different characters, I decided to pick a time period and stick to it. So I aimed for shortly after Major Winchester arrived. Margaret was less ditzy, Radar was still around, Klinger was still wearing dresses now and then, and BJ had his moustache.

These were great characters, and I think I've done them justice with this set. My favorite details are often the simplest ones--for the M*A*S*H sets it's the dog tags you can see on Hawkeye, BJ and Radar. There's nothing printed on them--they're just rounded silver rectangles--but for me, they're what makes the figures work. That and the stubble on Klinger's face and legs. 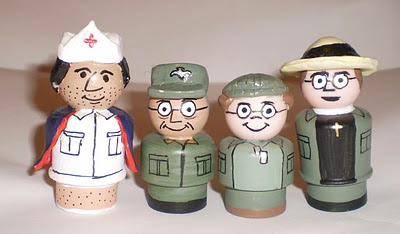 I can see myself revisiting M*A*S*H and making a set representing an earlier season--with Trapper, Col. Blake, and Frank Burns. All are excellent characters, and Col. Blake's Indiana sweater and fishing hat are just begging to be rendered in Quinnarama's Little People form. And then we'll probably need Klinger in a different outfit. Maybe Gone With the Wind. And Margaret in pigtails. And then a little signpost. And a set of them in surgery gear. And a little "Swamp" playset, complete with a little still...man. I have problems.

Posted by Quinn Rollins at 5:17 AM